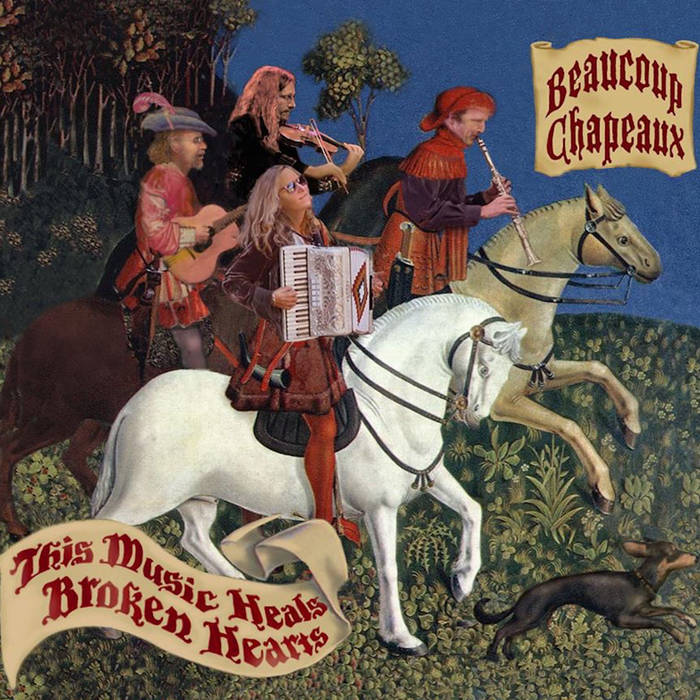 Descriptions of Beaucoup Chapeaux's music vary, but the term "magic" is frequently invoked. Whether raising the roof on a rural community dance hall or bustling bistro, or hairs on listener's arms in pristine concert settings, this lithesome quartet knows how to create joy, beauty...and magic. Their extraordinary repertoire of originals and music re-imagined from dozens of European and Balkan cultures, ancient and contemporary, is fresh, personal, and universal.

"We love your new CD!"--Sean Bianco, host of Capitol Public Radio's "Night at the Opera".

For ten years, and 700+ performances, Beaucoup Chapeaux has been creating community and joie de vivre:

"...Beaucoup Chapeaux, a world and fusion quartet was at the Red Poppy (Art House)...So many fans showed up that the Poppy’s small wine bar ran out of glasses, but the crowd felt like family, with cousins crowded around the table, and you almost felt like volunteering to do the washing up."--Leah Garchik, San Francisco Chronicle, Jan 19, 2016

Murray Campbell, on violin, oboe, cor anglais, and vocals, also plays reeds for numerous symphony orchestras, including North State, Auburn, and InConcert Sierra. One of those rare beings who is equally at home on the orchestral stage as he is improvising on reeds and strings, Murray has worked with the Belfry Brothers, ChickenBonz, Paul Kamm and Eleanor MacDonald, Alasdair Fraser, Kipchoge Spencer, Bristle, and Lisa Mezzacappo's String Band, among many others.

Randy McKean, on clarinet, bass clarinet, and tenor sax, and vocals, draws upon methods of distillation and synthesis pioneered by composers such as Anthony Braxton and Iannis Xenakis. Other projects include leading the avant-garde quartet "Bristle" (with Campbell, bassist Lisa Mezzacappa, and reed player Cory Wright).