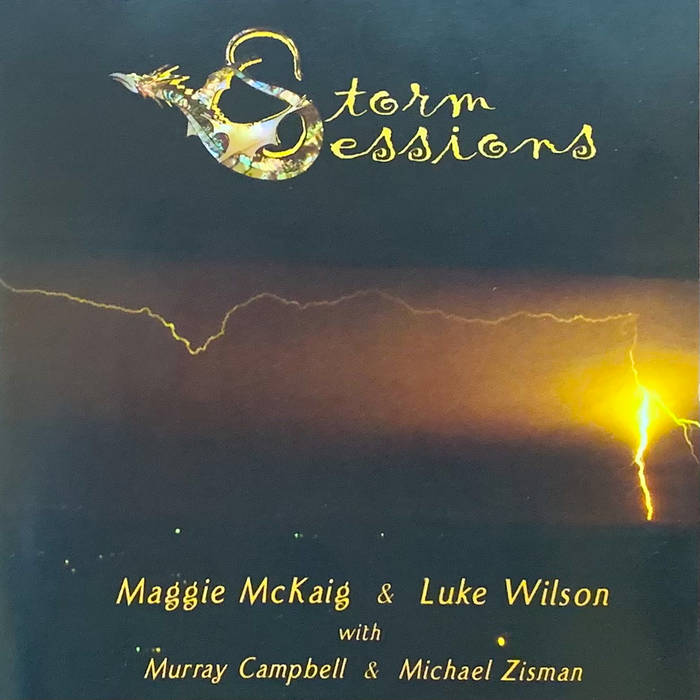 Storm Session was created by singer, songwriter, composer, accordionist, guitarist, and sometimes essayist and playwright Maggie McKaig. With a voice both rich and authentic ("The real thing!”), she’s recorded 6 CDs so far this century. She’s performed with the renowned jazz bassists Michael Zisman (all over this album) and Bill Douglass, as well as the great saxophonist George Brooks. As an accompanist she's worked with many singer-songwriters, including a year and a half on the road with two-time Grammy award winner Mary Youngblood.

Maggie’s prior bands include the Alberta, Canada based folk rock band Lost in the Colonies. In Northern California, she's led the Celtic Wonder Band and the contemporary music ensemble Storm Session. From 2009-present, her the world fusion quartet Beaucoup Chapeaux, with Luke Wilson, Murray Campbell, and Randy McKean, has made a lot of audiences very happy.

In California, Luke has enjoyed working with jazz bassists Michael Zisman and Bill Douglass, violinist Alasdair Fraser, and many singer/songwriters including Saul Rayo, Kimberly Bass, Sands Hall, and Utah Phillips. Major festival performances include California WorldFest, KVMR Celtic Festival, Strawberry Music Festival, Salem World Beat Festival, as well as the Calgary, Edmonton, Regina, and Saskatoon Folk Music Festival. Luke, who lives in Northern California with his wife, musician Maggie McKaig, is a second-generation luthier, and been working as such for nearly 50 years or so. But who's counting. He runs his shop, Wolf Note Studio, with his son Bryn Wilson.

The amazingly versatile Murray Campbell—violin, oboe, and cor anglais— was born in Scotland. Murray is as much in demand for his musical improvisation skills as he is for his abilities as a classical musician. As an oboist he performs regularly with numerous Northern California symphony orchestras including North State, InConcert Sierra, Music in the Mountains, and the Auburn Symphony, and more.  Campbell has recorded/and or performed with many singer-songwriters, including Paul Kamm and Eleanore MacDonald, Sands Hall, and Zoe Boekbinder. In the world of more adventurous music, Campbell performs with a number of new music ensembles, including Randy McKean's Bristle, the acoustic-electronics duo The Gargantius Effect, and many more.

For the last 28 years, bassist Michael Zisman has been performing with jazz stars such as Harold Mabern, Cecil Payne, George Coleman, David "Fathead" Newman, Ernestine Anderson, James Williams, Eric Alexander, Dena DeRose, and many others. Michael previously served as the Artistic and Education Director of the Stanford Jazz Workshop and Festival, and is the creator of “The Real Easy Book” as well as co-author of “Walking Bassics”, all published by Sher Music. Michael has been an adjunct faculty at SF State teaching jazz courses since 2007.

In 2006, Michael picked up a mandolin, and hasn’t been the same since. Michael’s band, Americano Social Club, is one of San Francisco’s most beloved event and party bands.

All songs by Maggie McKaig except: “Titania’s Lullaby”, text by William Shakespeare (or not, depending); “When the Mountains Cry”, music and lyrics by David Mansfield and Tom Russell, published by Jocada Music (BMI) and Frontera Music (ASCAP); “Christmas Bells”, text adapted from the poem by Henry Wordsworth Longfellow, arrangement by Maggie McKaig; “Take Your Time and Do It Right”, music and lyrics by Chris Whiteley, HYC Music. All others are traditional tunes and songs, with Storm Session arrangements.